Just added to your cart

Spend just 150.00 To Get FreeShipping

With technology rapidly improving, more and more new bike-specific products are flooding the market. The days where local riders would smash the home trails at night using only their camping headlamps are long gone as new BRIGHT and CONVENIENT lights become available and more affordable.

Bike lights come in arrays of brands, LED types, power, mount types, sizes; you name it. Oftentimes you will step into a shop and notice the wall is covered with similar-looking products of different brands and different prices – How to choose the one that you need?

Now each rider is different and, as in everything about biking (is 26’ dead? Are you riding flats or clipless? Tall socks?), there are individual preferences for lights.

From retail and riding experience gained over the years, one can use this simple logic as a starter and come to very good conclusions about the type of light one would need. 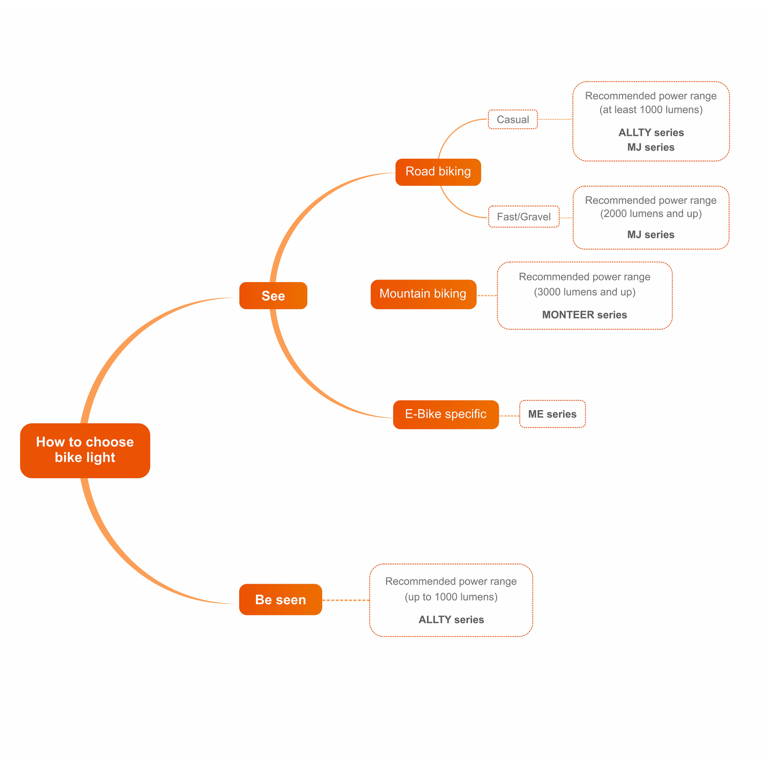 TO SEE VS BEING SEEN 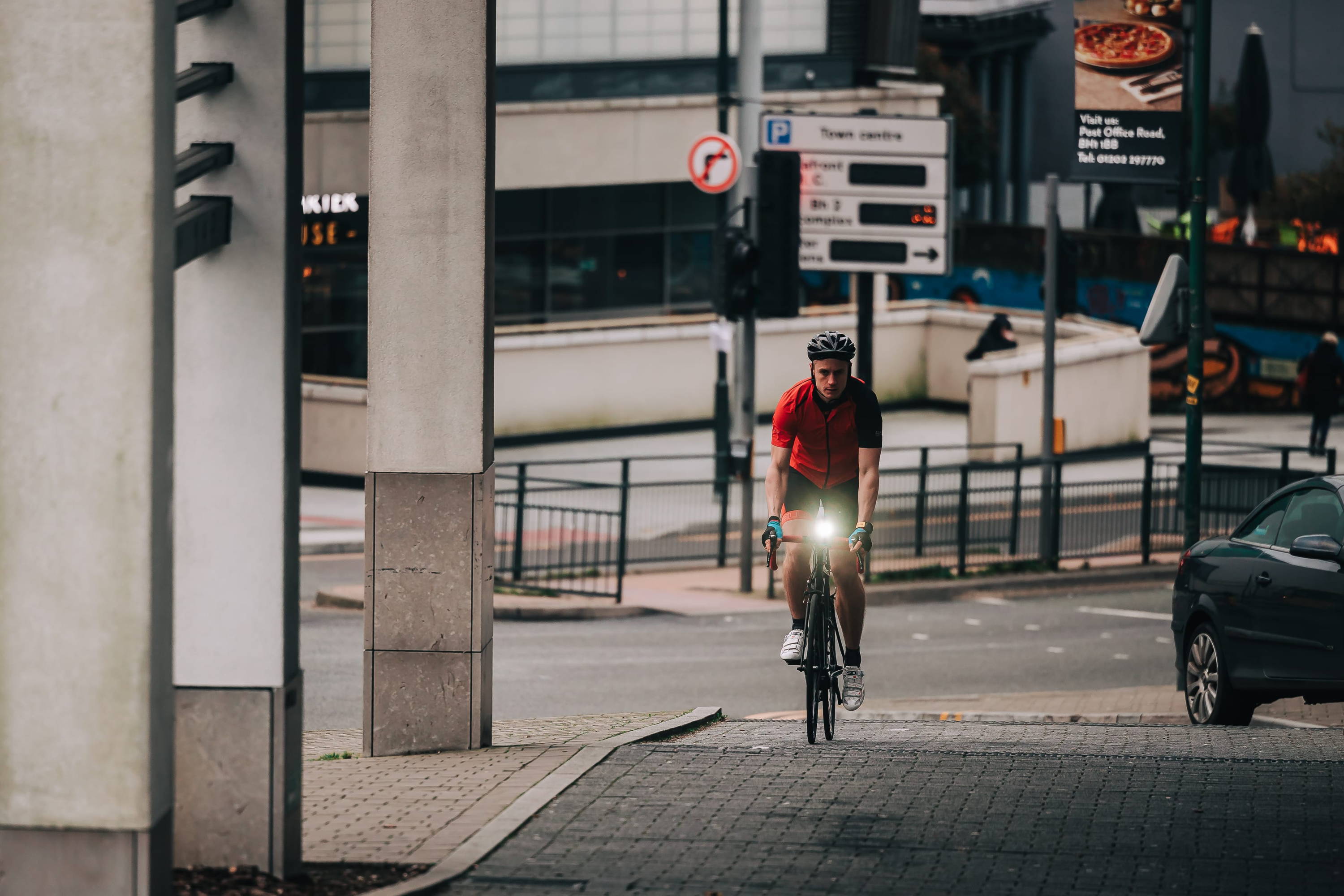 The first thing to sort out is the type of light needed, which can be answered with a simple question: As a rider, do I only need to be seen by incoming cars or other road users, or do I need to actually see where I am going? The former will require a less powerful light than the latter.

The human eye has evolved to quickly spot a moving target, and the speed at which an object is seen increases if the object is bright, hence the use of a flashing light when the sun goes down.

Additionally, lights used to be seen do not need to be the most powerful as their main purpose will be to attract another road user’s attention, not to see far ahead of the front wheel.

As such, if a rider only needs to be seen, then they can choose a light with less than 1000 lumens such as one from the Magicshine Allty series.

The ALLTY is a versatile light series that comes in a range from 400 to 2000 lumens.

The first of the series, the ALLTY 400, is bright enough so that when in use it will be seen early by road users, which will keep the rider safe even during daytime.

For more power and increased brightness, the ALLTY 600 and ALLTY 800 will be seen from even further away at maximum power, and will provide the rider with a larger range of brightness so the rider can tune the light according to the ride’s duration. For longer commutes, tune the light to a lower power and it will last longer.

Moreover, the ALLTY 1000, ALLTY 1500, and ALLTY 2000 are bright enough that if a rider gets caught in pitch black, the light will provide a powerful beam that shines far enough ahead of the front wheel so that the rider will be able to safely get back home without slowing down too much.

Now when a rider needs a light so that they can see, then a more powerful light is recommended.

The main reason is that the further up ahead of the front wheel you see, the faster you can ride. In other words, a light that isn’t powerful enough, such as below 1000 lumens, won’t light up the road far enough to allow you to see incoming obstacles (potholes, cracks, squirrels, …) when riding over 20 km/h. Obviously, one may be enjoying chill rides below 20 km/h, for which a 400 lumens light might very well provide sufficient power.

LIGHTS FOR DIFFERENT TYPES OF RIDES

The next question in the decision process is: For what type of rides will I need this light?

Evidently, someone riding brand new pavement is not subjected to the same challenges as someone that is mountain biking in wet technical trails. As such, the more challenging the terrain; the more powerful and wide the beam should be. 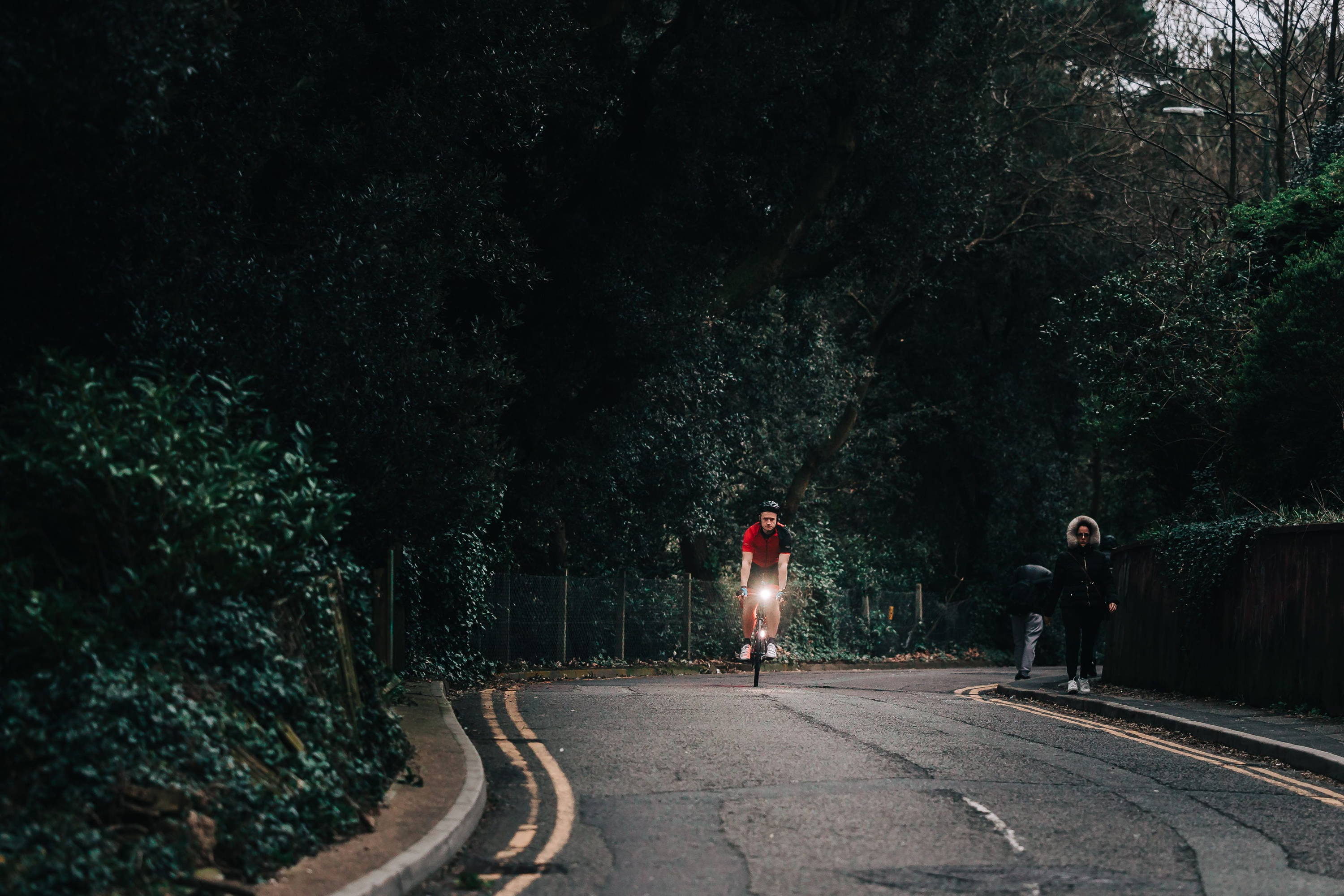 Generally speaking, as mentioned earlier, a road biker will need a light with at least 1000 lumens to light up the road far enough so that the rider can hold a comfortable speed without riding blind.

The more powerful RN models, RAY models and ALLTY series, which provide 1500 and 2000 lumens will do a great job for the everyday commute or the casual road ride.

Now the faster one rides, the further ahead one will need to see.

Additionally, when speeding down a hill at 70+ km/h, not only it is important to see far ahead, but for safety one should be able to see far enough on the sides of the road to see potential escape lines and avoid sudden obstacles (like, you know, all the critters crossing the road at the last second right under your wheel).

Also, you surely have heard about gravel riding. Riders on rough roads at night will definitely benefit from more power and a wider beams it will allow one to keep riding using a natural pace, without constantly being surprised by a rock coming out of the darkness.

For this, the Magicshine MJ series is perfect as it possesses not one, but two powerful LEDs which provide a larger beam than the ALLTY series.

The MJ series is more compact and range from 1500 to 4500 lumens – probably enough to light up the post-ride parking BBQ for a dozen riders.

The advantage of multiple LEDs is that not only it makes the light brighter, and it will illuminate a larger area to allow the rider to naturally use one’s peripheral vision when riding. 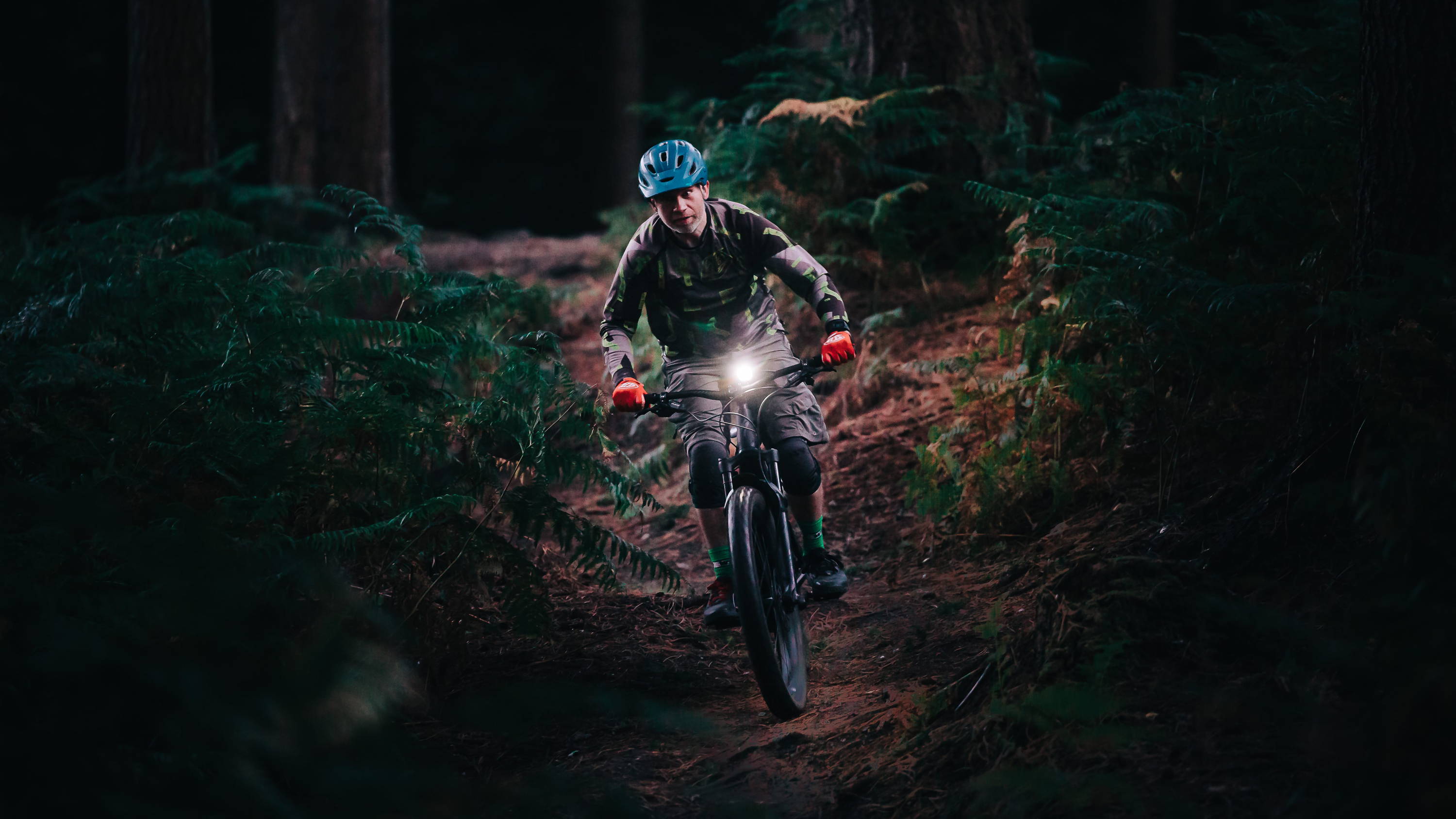 Probably the most challenging type of ride, mountain biking is the discipline for which I would recommend the most powerful light (to see far) with as many LEDs as possible (to see wide) using the previous arguments.

The reason is that obstacles are always incoming, and you want to be able to see multiple lines and safe escape routes.

And if the rider can see the whole trail and far ahead, the better one will be able to adjust direction, position on the bike, and speed or braking.

While riding with a less powerful light, such as 1000 lumen is doable, the rider will have to reduce speed and ride more cautiously.

The Magicshine  MONTEER series, click here to check Bikeradar Review on MONTEER 8000S is the beefiest light in their lineup and provides all the important qualities required for mountain biking: Power is from 3500 to 8000 lumens (please don’t look at it directly when it’s turned on) and they have 5 ultra-powerful LEDs for bright and wide illumination of the trail. The ultimate primary setup for trail riding at night – it’s almost like daytime! 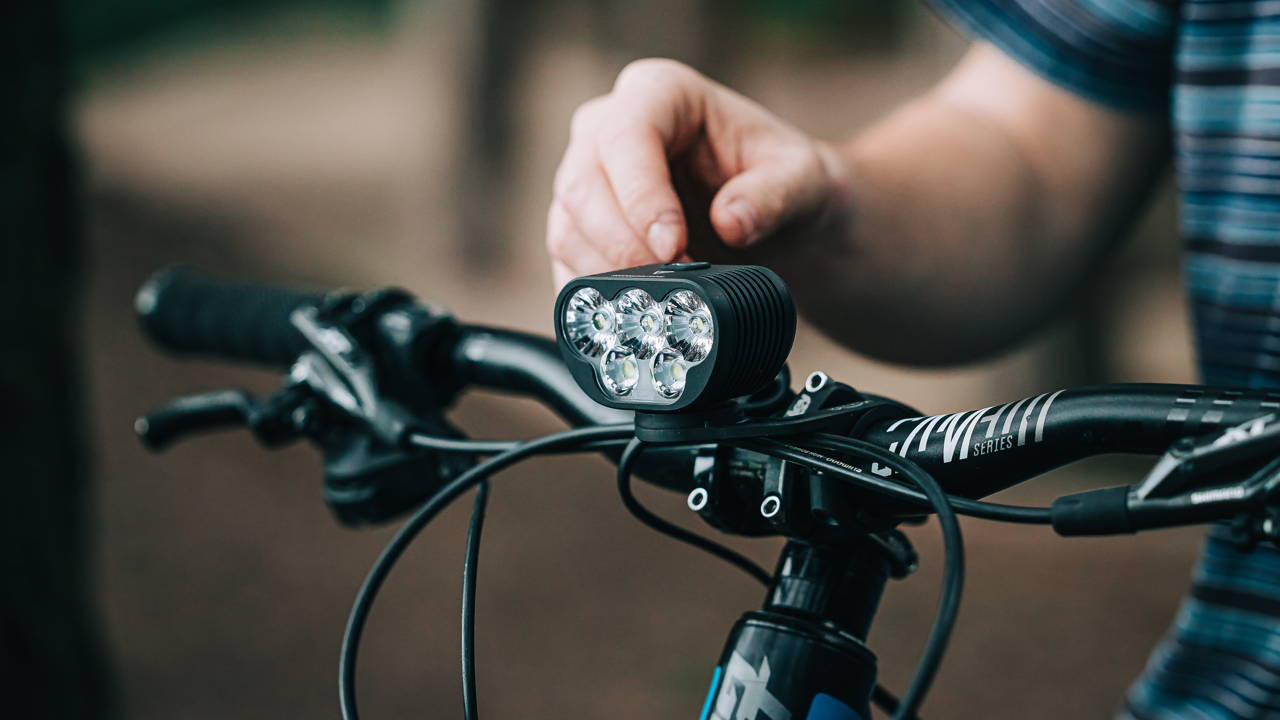 However, the qualities of the MONTEER series do not stop there: these are true adventure bike lights, ready to challenge the harshest conditions.

The MONTEER series features a waterproof casing with IPX 5 rating; in less technical words the casing is resistant to low-pressure water jet spray, so you can absolutely go for a ride under even pouring rain.

All models have the same 10,000 mAh battery, which means the light will stay on for over a day at minimum power – 32 hours at 400 lumens for the Monteer 8000 for example. At maximum power, one can expect runtimes starting at 1.5 hours for the 8000 model and up for the other models.

Large batteries usually come at the price of a slow charging time, but the Magicshine MONTEER 10,000 mAh battery only needs 9 hours for a full charge. Nine hours can seem long, but considering the MONTEER runtime and brightness, you would probably need to find a place where the night is dark enough and long enough to possibly run out of battery.

Because Magicshine is at the edge of the technology and hears adventure riders’ needs, the batteries do have an output port, which means that they can be used to charge your electronic devices.

This really makes the MONTEER the perfect multi-days adventure light as you would not need to bring another battery to charge your phone or GPS device.

All in all, the Magicshine MONTEER is your ultimate night warrior choice if you want to make no compromises.

The MONTEER lights are insanely bright, convenient, and will last almost forever. Set it up on your handlebar or on your helmet, put the battery on your frame or in your backpack, and just go for a ride!

Keep in mind that the faster you are going, the further you want to be able to see to stay safe. An experienced rider casually riding home trails at night at 50% daytime speed will probably do fine with a less powerful light, while if you are out on an E-bike trying to get as many laps as possible in unknown territory, you will definitely need a more powerful setup. I would also add that you should select the power of your light according to your skill level and/or comfort zone. A more experienced rider has better reflexes than a beginner, such that a beginner should consider a more powerful light. 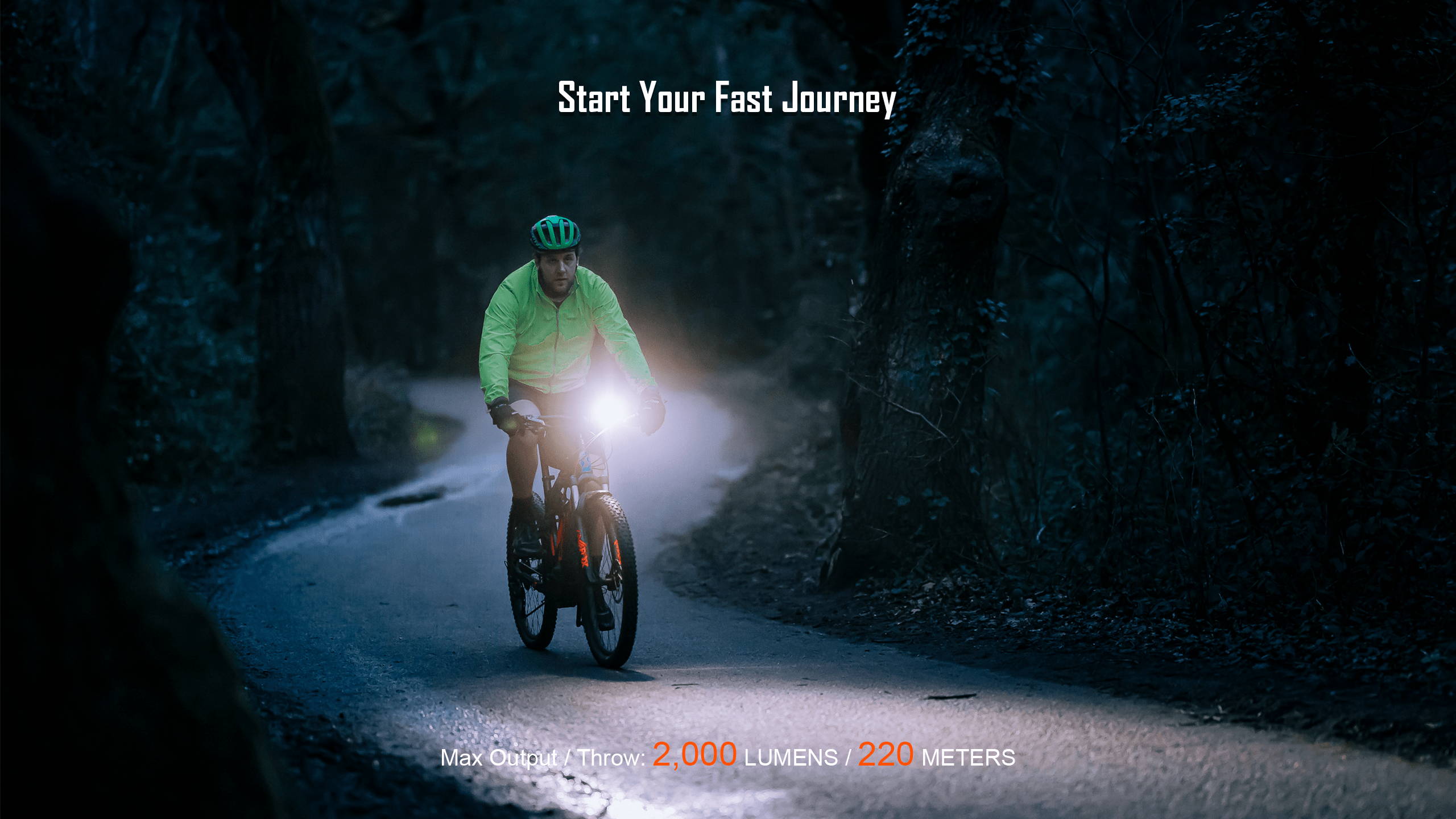 Speaking of which, while E-bikes rides don’t really constitute a type of ride in themselves as you can E-road bike and E-mountain bike, owners of E-bikes might want to consider E-bike specific lights that directly hook up on the bike’s motor. This spares the need of carrying the light battery for a lighter setup – very convenient!

Magicshine has E-bike specific lights, the ME series, which comes in 1000 and 2000 lumens versions. Very similar to the MJ series, the ME has 2 large LEDs and will provide sufficient power for most road ride types. When E-mountain biking, an ME light could be paired with an MJ or MONTEER light to light up a larger area.

Finally, it can be useful to pick a more powerful light than what one could get by with. Why?

More power means larger battery. A light will realistically run for about 1.5 to 2 hours at maximum power, such that if you are going for longer rides, you will need to use less power, so the battery lasts the whole ride. A strategic choice would then be a light that, when used at 75% or 50% power gives you sufficient illumination AND ample time for a long ride plus a 30-minute buffer just in case.

In the end, making a good choice only requires a little decision making.